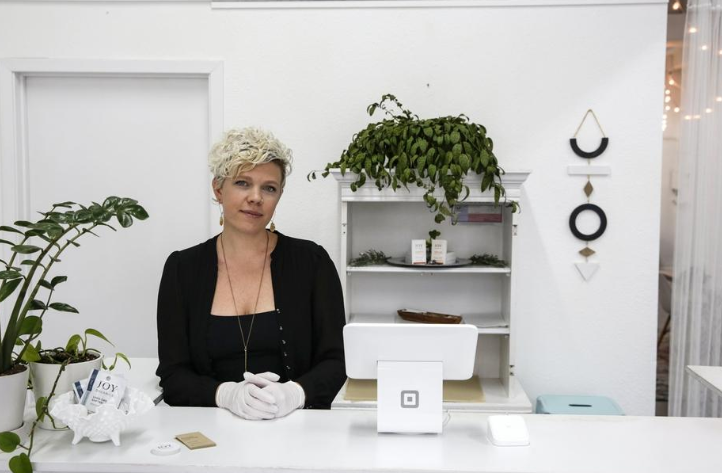 When Alamo Drafthouse announced Monday that it had shut down theaters in Austin to slow the coronavirus pandemic, employees at the South Lamar Boulevard location went to a CBD shop next door to clear their heads.

“They said they were looking for some relief,” said Hannah Wanegar, who was working that night at Greenbelt Botanicals.

The state ban on gatherings of more than 10 people has forced closures of gyms and bars, leaving some in Austin to turn to CBD, or cannabidiol, to manage heightened levels of stress. The number of shops that sell CBD has dramatically increased in Austin since last summer when Gov. Greg Abbott signed a bill legalizing hemp and derivatives such as CBD with less than 0.3% of THC, or tetrahydrocannabinol.

Although the federal government says it’s illegal to market CBD as a dietary supplement, store owners and some doctors swear by its benefits. They say it calms the central nervous system without the intoxicating effects of THC, the component that produces the high in marijuana — which remains illegal in Texas for recreational use.

Danielle Cearbaugh, owner of Joy Organics on the west end of downtown, said she sold CBD products this week to a man whose stocks took a nosedive and to a woman whose young children were home from school and getting under her skin.

Cearbaugh gives a CBD gummy to her 10-year-old son each day.

“Very rarely does anyone say it interferes with their daily life,” Cearbaugh said.

According to the website txdispensaries.com, more than 30 stores in the Austin area sell CBD. They range from shops devoted only to CBD to establishments that brand themselves as juice or vaping stores.

“Half of our customers come in for help with sleep and anxiety,” said Jack Malinowski.

At Maryjae in South Austin, employee Effy Williams said she sold products this week to a self-described hypochondriac with concerns about the disease spreading. At last count Thursday, 41 people in Travis County had tested positive for COVID-19, the illness linked to the new coronavirus.

Williams, wearing a sanitary mask and gloves Thursday morning, said the store is noticing an increase in online orders because customers are unwilling to venture out in public.

Cearbaugh, at Joy Organics, started offering free delivery plus the option of curbside pickup. All products in the store are 25% off.

“A lot of people are calling but not coming in,” she said.

That’s true also at Greenbelt Botanicals, which relies on foot traffic at Lamar Union Plaza but hasn’t gotten much since Alamo Drafthouse shut down. The store, like others that sell CBD products, deals with the stigma attached to selling a product associated with marijuana.

“It’s still taboo, but it’s coming along,” Wanegar said. “There’s nothing to be afraid of. It’s a plant that’s helping people.”